Hello
You would have to upload the file so I can look at it.

the file was extracted to .dat but i know now that its a .rax file

I can not for the life of me figure this format out.
sorry.

Hi Lazov! Please tell me how to find uv.
screenshots.jpg
file link: https://yadi.sk/d/UTleab58Y6cF6w
You do not have the required permissions to view the files attached to this post.
Top

what file type are you working with?
Top

And I left a link to the file.
Top

And I left a link to the file.

I'm super busy at the moment with my own project, but if I have time I'll take a look at the file and see if can help you

In the mean time try doing some research about the game and its file types.

You can also use trial and error to find the UV's by pasting the starting offset in DEC and increasing it by 1, then clicking the "View UV's" button until the UV's look correct. However, it may or may not work depending on the file type as you may need to find the padding. Hence why I suggest extensive research into game and the file type

The program has been updated.

- Added support for normal vectors!
- Template format is now compatible with the Pro version.
- The algorithm for calculating normal vectors has been changed. Now the model looks better.
- Added TStrip, TStripFF formats for texture coordinate indices and normal indices. Perhaps this is never used in models.

rudi246 wrote: ↑
Tue Jun 11, 2019 3:05 pm
I'm trying to extract the levels from a PS1 skateboarding game called Grind Session. I found the models inside the level files but they always have missing triangles. I have attatched a rar file that contains the level files for one of the levels as well as some of my templates for different models within the TRACK.DAT file. 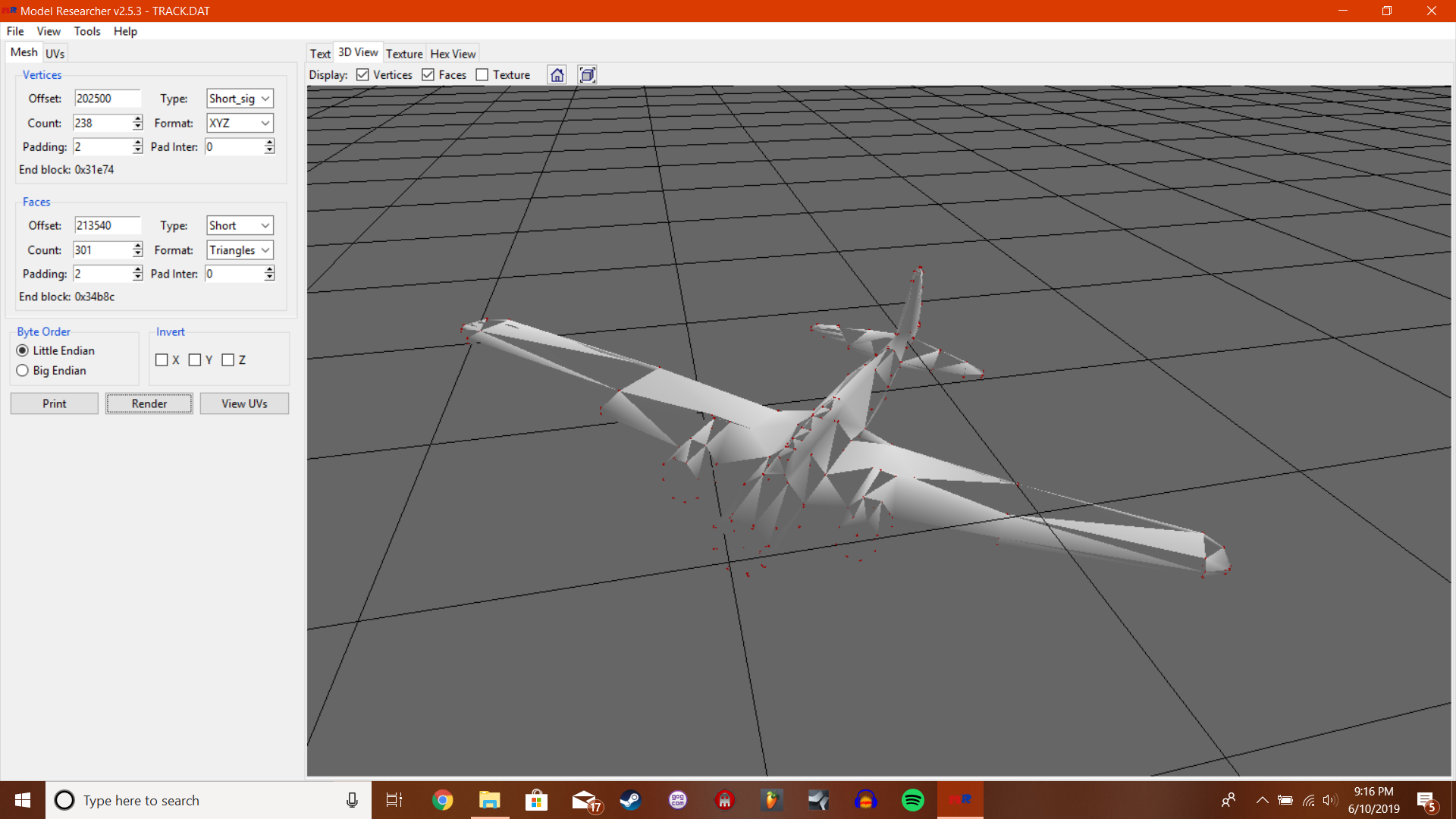 Hello.
I think that version 2.6 of 3D Model Researcher does not work well.
I loaded the file 'TRACK.DAT' and I got an error message. "Mismatch of faces and vertices!"
In the text section, when I check info, all the table for the faces disappeared.
Top

Thanks, Aterbust!
I updated the program.
Top

- Added support Quads!
- The output of data in text form has been changed: texture coordinate indices and normal indices are now displayed in separate blocks with the literals "fvt" and "fvn", 1 is not added to the indices. The old output can be enabled in the menu "View" -> "Print as OBJ";
- Added highlighting of texture coordinate indices and normal indices in the hex-viewer;

It is not necessary that the template contains data of all forms or all parameters of one form. Omitted parameters and forms will be replaced with default values. The sample templates below are correct:
However, support for old templates will remain.

- Added function to copy template to clipboard ("Tools" -> "Copy Template") and
function for loading a template using the form ("Tools" -> "Paste Template");
- Polygons on the texture in the Texture tab are now drawn without filling;
- Added "Copy-Paste" menu when clicking on a text field in the "Text" tab;
- Returned support for templates of previous versions of the program;
- Small bugs fixed.

Thank you for the work you're doing, Lazov

I really appreciate it. I have had much good use of this tool.
AES Key and UE4 Modding commissions:
https://bit.ly/31PFc3i

If you appreciate my work and want to donate:
Paypal: ghfear@hotmail.com
Top

Hi there Lazov. I purchased the Pro ver. of your software a while ago and it seems like I still haven't recieved an e-mail with activation-key. I didn't write you earlier, because I really didn't need the pro features very urgently, just wanted to fool around with it a little and try them out. I don't know if you are still active right now, but if you are, then it would be neat if you can send me the key, if you are not active anymore, then I don't really mind also, because I still had good use of the free version of the tool, so then I'd just see it as a 'lil donation for your efforts

MadTucker
Write to me in the PM. The message may be in the spam folder.
Top

Hi Mr. Lazov, thanks a lot for 3D Model Researcher, it's a great software.
I had extracted some models and I save them to obj, everything working good.
But I want to edit those models, and convert them from obj to hex or binary (reversing 3D Model Researcher obj-->hex), and replacing the game models by the new models, is this possible?
For this function I had made some codes woking only for vertices in short_signed, but they doesn't work with float or UVs.
This image explain vertices short_signed conversion: 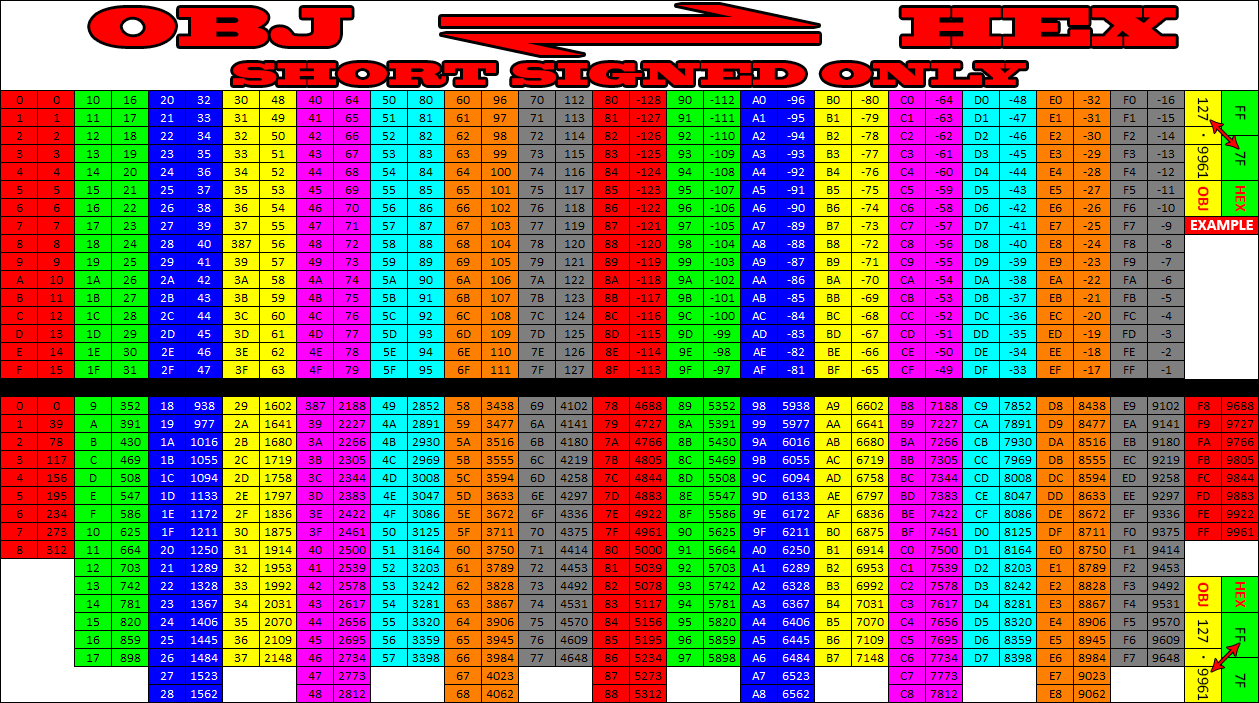 Edited:
I found some websites can do the calculation for vetices from obj to float or short_signed, I do this operation manually, and it's so tiring, and it gives not exact values in some cases.
Here is the websites links:
obj to hex [[Float]]: https://gregstoll.com/~gregstoll/floattohex/ "this site do the conversion called "IEEE 754" you can search it in google, check Swap endianess for little endian".
obj to hex [[Short_signed]]: https://www.binaryhexconverter.com/deci ... -converter "this site do only the conversion form decimal to hexadecimal, and this is the short_signed convertion"
The problem now is the UVs, I had them in short_signed in game models, they vary between 0 and 1, so when I put 0.710583 for example, it's always converted to 0 in the short_signed website, I try a lot of attempts but always 0.
Please can you give a website or a calculator or a software or you can make a script or a partition in 3D Model Resercher for converting the obj to hex in all forms (short_signed or float and UVs) to hex, and upload it in new vesrion v2.8 , this will creates a big buzz in 3D modeling.
This is my email: johnsegal613@gmail.com
Thanks in advance

Segal, learn the basics of Python and create this converter.

The fact is that all models have a different format, and it is impossible to create a converter for all formats.
Top