It should allow u to extract 3D models with simple formats.
Means such games like Mafia2 or SleepingDogs not to be supported.

Before using hex2obj on a difficult format try out some of the dozens of simple samples on Xentax
to understand HOW it's going. Searching for "simple" over all of my posts, you'll find something like this:

Ok, the truth is - there are two things you should understand:

Secondly you should be able to use a hex editor.

If you don't have these two skills leave now, and come back as soon as you gained them.

(If you don't have a clue which hex editor to use: TinyHexer or HexEdit by A.W. Phillips should do the trick.)
See list here and comments in the following posts:

As I said you don't need to learn "basics" but you'll have to understand
"the structures" to use hex2obj.

o So here is a short tutorial on it's use.

You don't need to know the technical terms - I just use them habitual.

hex2obj needs the following infos to perform it's task:
the startaddress of the vertices and the one of the faceindices.

(Some experience is required to find them but it's not too hard.)

Secondly we need the vertices count and the faceindices count.

the two most common are:
a) "sequential"

(v: vertex position, vn: normals, vt: uv)
With a sequential model you only need to provide the above mentioned counts.

With a blocked model you need to choose the vertex block size (FVF size), for example 32.
(And 'yes': the order might be v, vt, vn for example)

If you don't understand anything you'll have to do a trial 'n error (No, no I really don't recommend this.

Or you calculate the FVF size: each coordinate (x, y or z) consists of 4 bytes.
So the above two blocks have a blocksize of 32 (8x4) each.

It might be a little bit more difficult if there are DWORDs contained in the blocks.
But anyway the most common blocksizes are 32, 40, 52. Sometimes 24, 44, 48 whatever.


o the v,vn,vt patterns to search for

well, to identify what is v, vn or vt is the tricky part. This is for little endian
(for big endian the patterns are in reverse order of course).

It's important to know that half floats use two bytes only.

The face indices are very easy to find since parts of the indices block look like a scrambled alphabet.

If we scroll through hw_bu_000.bm in a hex editor we'll find this:

To find the correct ending of the list is a very important step.
Here it's rather easy (0x4845) because it's bound by a string size (09 000000)
and the corresponding string.

Medium font version (for laptops with high DPI screens for example):
will be added to above link as soon as someones needs it (nobody requested it so far)

Since there a still some downloads after all the years I feel obliged to tell you guys once again:
hex2obj is NOT a one-click-solver tool - it was designed to help people to help themselves.

If you don't have a basic understanding of 3D model formats you surely will get better results using a 3D ripper (for PC).

With this said I think it's time to make a check list for noobs concerning the analyzing of 3D models:

fixes
Fixed a bug (prior to v 0.24e3) with triStrips not resetting on parameter change

todo list
project finished , more or less
(or call it "abandoned" since there are better tools from Bigchillghost and Lazov)

Q: how to find the start addresses of vertices and face indices (FIs)?
A: as for FIs, search for a "scrambled alphabet" but in general it's like this:

I don't know where vertices end and where faces start. The only way is make an assumption, check it. If its wrong, make another one, and check again. With time and experience, you will usually be able to make it right from the first try. (daemon1)

Q: when I press the 'mesh' button it gives me an exception.
A: A problem with the external mesh_viewer app. It expects a proper obj.
But hex2obj will not always provide a proper one.
It's some kind of trial 'n error tool, you know?

(With some knowledge you could have a look at test.obj to see what's wrong.)

Q: when I press the 'mesh' button nothing happens.
A: have a look at the output of the console window. If it's like this

That's the fundamental idea behind the project.

A: happens, when you use a bigger font size in the Win7 GUI.
Since this seems to be rare I won't upload a separate exe version.
(Feel free to request one if required.)

more detailed hints on use of hex2obj:

when you're stuck with the tutorial ('tut' button in hex2obj)

nice !
in near future i hope you extend these tutorials to more advanced levels of a typical modern 3d model like normals , texture coordinates ...
ILLUSORY VIDEO GAMES ARE MORE IMPORTANT THAN PRECIOUS INTERNATIONAL FOOTBALLs
Top

Normals are of subordinate meaning imho because you can autocreate them in nearly every 3D tool - as I wrote.

Where the first 12 bytes are the x,y,z position and the following 8 bytes might be 4 half floats
vtx1,vty1, vtx2,vty2?

Automated analysation will always be limited.
This is a tool for noobs to reduce the threshold.
In the end there's no other choice than using your brain on analyzing of more complex models.
Last edited by shakotay2 on Fri Nov 01, 2013 1:20 pm, edited 2 times in total.
Bigchillghost, Reverse Engineering a Game Model: viewtopic.php?f=29&t=17889
extracting simple models: viewtopic.php?f=29&t=10894
Make_H2O-ForzaHor3-jm9.zip
"You quoted the whole thing, what a mess."
Top

Is possible in the future load the entire model and not only submeshes? (for example, the model from dante's inferno)
Top

luxox18 wrote:Is possible in the future load the entire model and not only submeshes? (for example, the model from dante's inferno)

It's planned to introduce a param's file where to store the data of submeshes (vertex start addresses, vertex counts). But this will not release you from searching for the submeshes manually before.

Building the entire model from this param file's data should be possible.

edit: version 0.1 (view start post) can handle half floats and triangle strips.
Load/save of a H2O (param) file is possible.
Composing of submeshes to an entire model not implemented because of
possible "65535 indices border" crossing (DWORD required).

Although it's not really difficult, it has low priority for me.
This is the reason: atm you'll have to search manually for every single submesh (SM) of the model.
Often there are patterns by which you can identify the start addresses of the SMs.

But you need to know these patterns which are different with every game.
(And for some models there aren't such patterns.)
I can't think of a feature how to get them automatically.

Once you know the pattern you can find the SMs by using your hex editors search function.

Handling triangle strips with version 0.1
With the model c_pnzgren_body1.ps3mesh from this thread viewtopic.php?f=16&t=10906 you'll get the head by simply loading
the model and the pnzgren.h2o (param) file.

You'll have to toggle the 'std' button to 'FFFF' (separator) bevor you click the 'mesh' button.

Entering these values and clicking 'go1' reveals a vertex count of 755 at the lower left listboxes' end. 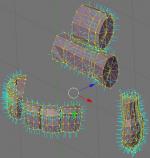 version 0.2 is out. Can handle vertices/UV data as WORDs (unsigned 16 bit values).

(As always I hope I didn't mess up too many things.)

The use of the 'cut'-button might be required for "Word_all" models:

edit:
with the fixed version 0.2 I got a rage bmodel:

but .bmodel is not always triangle strips as you can see:

From the tut you know there are two main ways how the model data is organized:
"sequential", that means there are all vertices (v) then all normals (vn) to follow
then all uvs (vt). (May also be: all v, all vt, all vn.)

Another possibility is the "blocked" mode.
Means you have a Vertex Block with a size of let's say 32 bytes.
First block contains first vertex, first normal, first uv.
2nd block contains 2nd vertex, 2nd nomal, 2nd uv.
And so on.
(That's an example only! There may be other data in the blocks, such as DWords.)

You may have a vertex block with a size of 16 bytes (3 floats vertex, 1 float unknown),
then the 2nd block and so on.

After the last vertex block the uv blocks start.
May have a size of 12 bytes (2 floats UV, 1 unknown DWORD)
Then the 2nd uv block follows and so on.

I call it "mixed" mode because you can look upon it as a blocked AND as a sequential mode, too.
"Sequential" because there are all vertices, then all uvs.
But vertices and uvs are in blocks, too. Not with each other but together with other data.


advice: the address and the size of the UV block are
NOT saved into the H2O file so far.
You do not have the required permissions to view the files attached to this post.
Last edited by shakotay2 on Mon Jan 20, 2014 1:52 pm, edited 1 time in total.
Bigchillghost, Reverse Engineering a Game Model: viewtopic.php?f=29&t=17889
extracting simple models: viewtopic.php?f=29&t=10894
Make_H2O-ForzaHor3-jm9.zip
"You quoted the whole thing, what a mess."
Top

With hex2obj 0.2x now I can obtain UV from Dante's inferno models

shakotay2, the links are dead

I have the file and could upload it as last resort, but this really should be added to the Tools blog.
Top

Workaround for formats which use shorts for the vertices and half floats for the uvs:

Then copy all vts (without the face indices) into the (ShortAll) obj.