The Off-Topic Forum - Anything goes! As long as it's legal(ish). Things that made you scream "Holy Cow!"
Post Reply
108 posts

Mr.Mouse wrote:Excellent stuff ! Thanks to you all for replying to the email, it makes the work for us so much more worthwhile to know that good came out of it (and even a marriage! Great!).

I'll second that! Are you gonna make a blog post out of this?

As you were asking for feedback in an email, here it is:

I'm able to extract all files out of AGS games of specific versions and I can modify local scripts as far as they are not connected to global scripts. This is thanks to a tool from asmxtx.
Unfortunately, there is nothing to be done about global scripts which limits the possibilities of every user.
I would like to use here also the possiblity to point out interest in such tools and the wish for further development.

I'm currently thinking no one in the world is good enough at programming to make an extractor for global scripts of AGS games. I want to challenge you: Proof me the opposite! Proof that you are the best programmer in the world.

Were able to make custom brightskins for Quake Live thanks to aluigi and his tools
On the right is custom 'sport' skin.

In response to the email I received recently, I'd like to again thank 'john_doe' for working out the 'RA' compression scheme used in 'F22 Total Air War', one of the great flight sims released in 1998.

It was four years ago, but I still use the utility quite often as this type of compression was used in all of DiD's games going back to at least 'TFX' in 1993.

I'd forgotten that the thread above contains information about how we may recompress any modded files and repackage them to speed up load times...so thanks Mr.Mouse for the reminder.

Well, in response to the email, the game I've been attempting to reverse is Metal Gear Solid 3 which most of you probably know remains unbroken. While the info on this forum did help me avoid some redundancy in my attempt, I have decided to go the dis-assembly route with the game. It looks very challenging, I can't even begin to analyze this right now since I have to become very familiar with MIPS and the EE core/VU instructions not to mention the whole design structure of PS2 games. I probably won't get very far with this, but it makes me very frustrated to see PCSX2 running this game on my PC and see the game very clearly reading its archives on MY PC. It would be wonderful if there were some kind of PCSX2 debugger one could use to analyze the execution of PS2 games, but oh well.

Great forum anyway, I expect to be using its resources for other more reasonable attempts in the future. Of course, I will share anything I happen to find/make.
Top

Also as a result of the e-mail, as I was previously unaware of this thread's existence. I haven't really modded games with knowledge gained from Xentax, but many people have modded games (and made horrifying media/videos) as a result of my work, which is also often rooted in Xentax. So I want to take the opportunity to thank a few people.

Mr.Mouse:
-Hosts Noesis and its site!
-Active admin and founder of XeNTaX! (we're not worthy)
-Without his efforts toward XeNTaX, Noesis may never have been born.

aluigi:
-Cracked encryption on Ys: The Oath in Felghanna archives, which allowed me to get at the .ymo data with ease.
-I'm not sure what else, but he's constantly figuring out compression/encryption methods for various games, and he rules.

Surveyor:
-Made public most of the ground work for the Capcom .mod format, and saved me hours (maybe even days) of hex-editing!
-Is also generally awesome, and has tackled countless model formats on XeNTaX.

revelation:
-Also assisted in the Capcom .mod format and made many of his findings public, which assisted me in conjunction with Surveyor's efforts.
-Yet another awesome guy that is always popping up whenever there are models to be discovered.

This thread also made me realize that the readme for Noesis needs a "special thanks" section.

Sometimes the people doing the core work on reverse-engineering formats and data can get kind of bummed out by people who just barge in and selfishly demand things, but their passion drives them to keep discovering and sharing despite that. It makes me very happy to see ingenuity, curiosity, and courtesy triumph over some of our more selfish and isolating traits as human beings. So to all of you guys, thank you. You are all awesome.
Top

Ok, so I got an email asking me to post my results, or rather, what I did with the knowledge I gained here, so in the interest of not being an ungrateful douche, I am doing so

I used the tools for ripping the models and maps out of tekken 6 to extract Nina Williams, who I then turned into a survivor replacement for the game Left 4 Dead 2. Pic Attached...

Overall she turned out pretty well, had to tweak a couple maps and re-rig her with the l4d2 bones instead of the tekken ones, and valve does something weird with the hand anims too(sigh), but I'm still mostly pleased with her considering I converted her to l4d2 in a matter of a few hours. Because she is a client side mod, she can be used in any mode of play, online or offline, which is also bonus.

For those who are interested, she is available for download at http://www.mrlanky.com as are all my other l4d2 mods. Feel free to download, use, and modify them as you like. They were all made possible by the tools made available by people here and elsewhere, so I claim no ownership of them. I just make them for fun.

On that note, I would like to once again thank all those responsible for making the tools and programs which make this possible, and for making these available to us all. Your efforts are truly and greatly appreciated.
I know I would have stopped playing l4d2 ages ago if not for all the fun with mods I can have thanks in part to you guys.

Alas, I've had no luck whatsoever in trying to achieve what I set out to do, namely export models from Hellgate London (have extracted models but can't open them) and Aeon Flux -PS2 (ditto that one) and port them across to Fallout 3.
There just doesn't seem to be much interest for those two titles

Still, 3dxripper will pull meshes in the case of hellgate, but they need a lot of reworking
But anyway, I have learned a lot since checking in here, though understanding hex dumps and then writing scripts just can't squeeze it's way in there when I am in the middle of trying to figure out zbrush and a foreign language

Thanks to the hosts and all the generous contributors for this great collection of knowledge at Xentax:)
Top

Many thanks go to Evin for the Alan Wake extraction tool! I wanted to use the audio from the game for some personal projects, but just having the FSBs wouldn't have done either. Previous modders' posts throughout the forums were greatly helpful in teaching me what I needed in order to get the WAV files I wanted from the data files I had.

Thank you XeNTaX Forums, and thank you to the rest of the community!
Top

dimwalker wrote:Were able to make custom brightskins for Quake Live thanks to aluigi and his tools
On the right is custom 'sport' skin.

I managed to downgrade the Quake Live exclusive maps to Quake 3 also using aluigi's tools. Having these maps in Quake 3 proves useful as it means you can play them on lan.

The maps more or less worked well. Had to use the ioquake3 because it supports the PNG textures Quake Live uses. Had a wee problem with the adverts. They use a Quake Live classname "advertisement" which shows up blank in Quake Live. This wouldn't be a problem except on some maps, looking at the advertisements, you can see through the level. Also couldn't get bots to work, kept getting a message saying the AAS file was out of date.

You can also play custom Quake 3 maps on Quake Live vs bots (not sure about hosting custom maps on servers). Just gotta encrypt the PK3 with aluigi's tool, set the map to read only (so QL doesn't delete it), start a practice game and load the map through the console.
Novice in training =)
Top

So I found the One Piece Ripper which worked quite well, then mucked around a bit to get everythibg combined into 3dsmax properly so I could then export it to the source engine...why? Left 4 dead 2....I just love porting models over to it. So here is captain buggy in l4d2...he's my first attempt. Enjoy!

Check out my video of The stranger’s plans with bickering Dutch politicians. http://www.youtube.com/watch?v=fhW8rnDO4VI. DutchPolitician mod and Briefcase nuke mod for Fall Out: New Vegas combined.
Top

Extracting the Racing Team logos from Tokyo Xtreme Racer Zero on PS2- as most of them were translated into future games, it's nice to have them pixel-perfect- albeit 200x200 or under- for forums and the like. Sadly the biggest fan forum of the bunch is pretty much dead, so I'll probably end up dumping them here alongside some models if I or anyone else can do something with CDDATA.000; so far I've only found one TIM2 file, so i'll probably post it to the Game archives section. However, I kinda need my other two posts gone (on the TXR series) because it kindof looks like spam from all of the similar threads, so I might just make a general Tokyo Xtreme Racer archive thread and host everything needed from all the games in just that. That'd be a better idea I guess..

That being said, does anyone even like cars on here?

doom2_toplicht_levels_xentax.zip
Our Doom 2 levels from 1995.
Created in WADED (also in the zip file)

See also :
https://www.youtube.com/watch?v=VWXt4v_ ... 1vIy4CZO6a
You do not have the required permissions to view the files attached to this post.
Top 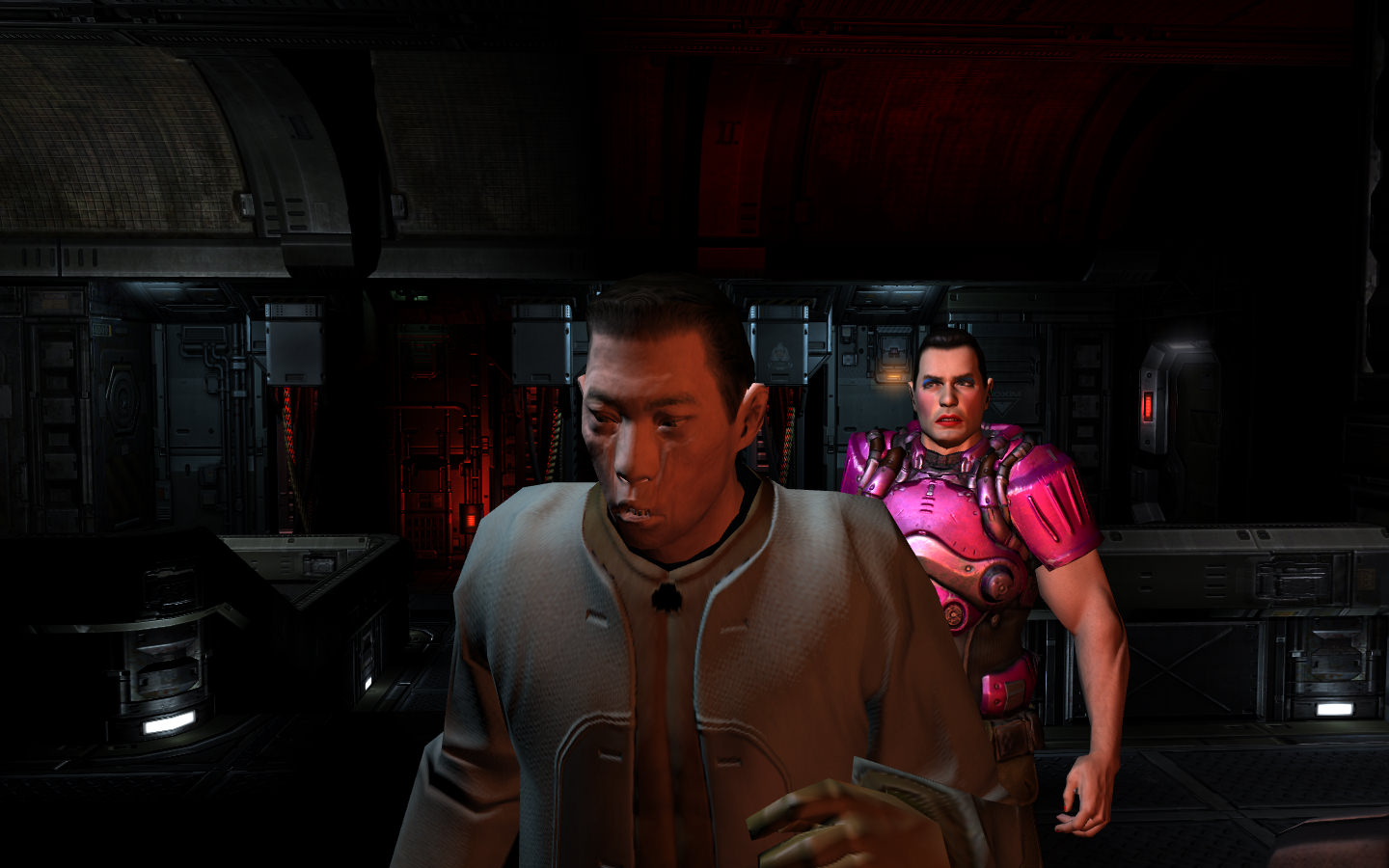