Get help on any and all audio formats, or chip in and help others!
Forum rules
Post Reply
56 posts

If you are using Windows 7 or Windows 8, chances are that you need to update your PowerShell:
Your PowerShell version should be no lower than '4.0.0.0'.
You can update PowerShell here and some more information can be found here.


If you are using Windows 8.1 or higher, please enable the '-Debug' parameter and run the script once more (you may use additional parameters):

You will find a folder called 'debug' next to the 'r6s_extractor_0.7.0.bat', all error logs are saved there.

PS: I'd be really intrested in those day 1 audio files...

alright I did it and lets see how It goes. im running the script again. Day 1 files aren't that much different but ive found some unused musics/soundtracks and 1 song which is really sad and gives me story mode music vibes I dunno how to explain ill upload it to youtube. https://www.youtube.com/channel/UCQ8eI6 ... subscriber this is my channel I upload cool stuff sometimes.

EDIT: Debug shows all sorts of errors you would understand so here they are.

just so you know, all error txt files here are untouched except r6s_extractor_12_wwise_error.txt because this one alone was 20mb lol thats a lot for txt file so it required lots of time to be uploaded so i opened it and saw all the errors are the same and i deleted most of them to reduce file size. I left around 10 or 15 lines there im sure you will know whats the error from those. All the errors in that txt say the same thing though.
Top

It seems like the enviromental variables are not set and if I had to take a guess on why the merging does not work, I'd say the path contains special characters.
However, I need some more information to help you out:

First i downloaded the r6s_extractor_0.7.0.bat from the link u posted here , i extract it to desktop and open it. Then it downloads Bin folder to the desktop and there it downloads all the required stuff as you know.

I can show you what folder and files i have in my siege directory. Its not an original copy though its a torrent. The thing is, r6_extractor.bat wouldnt work on my game because extractor looked for siege in directory where uplay games are installed and it wouldnt find siege because thats not where my game is installed. So what i did is, i entered system registry and added new keys for siege and placed my game files where uplay games are originally installed. Then .bat worked and now im stuck with this current problem.

So here are the pics: 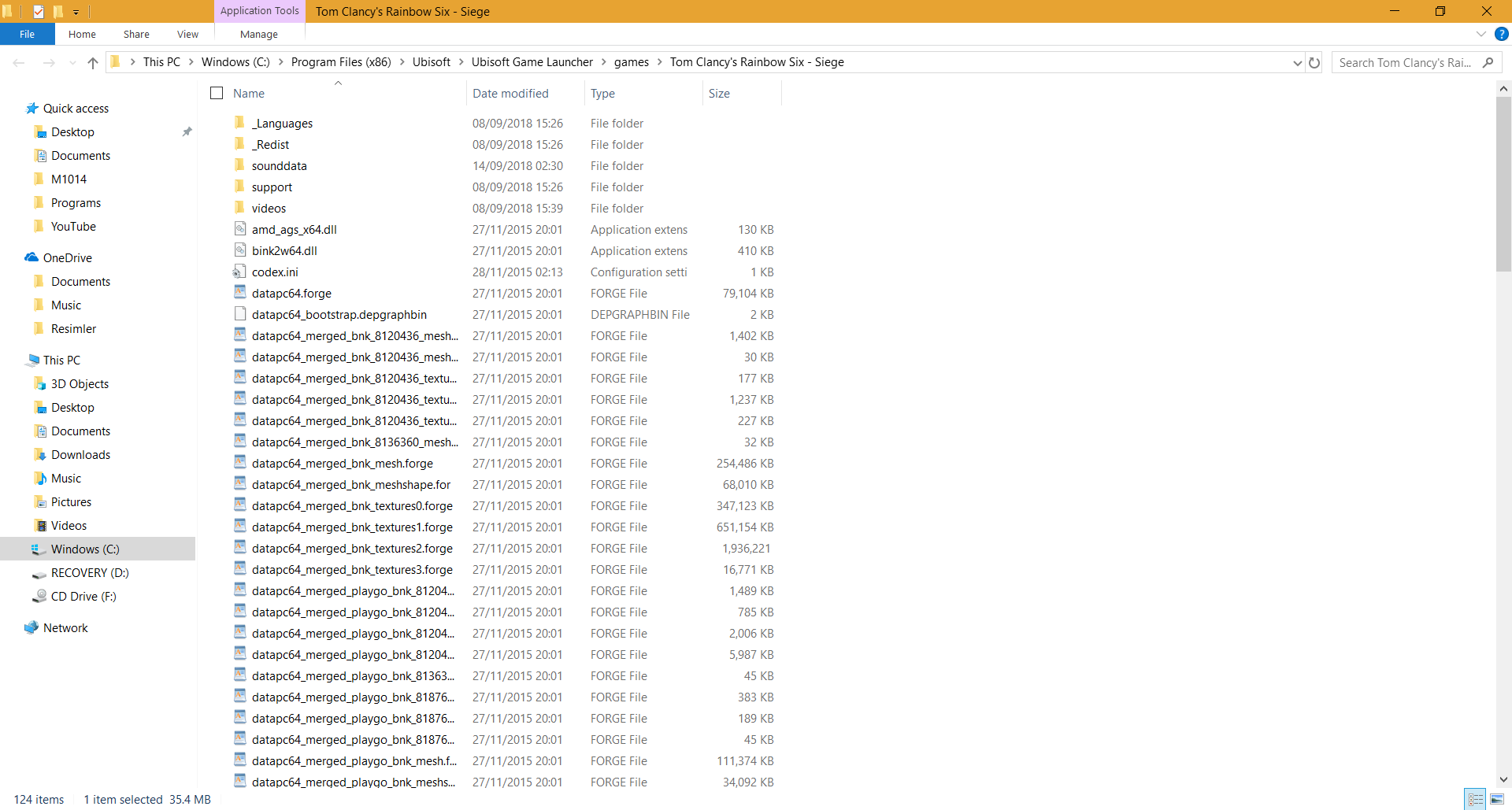 This is the game's folder.

This is what i see when i enter sounddata folder. 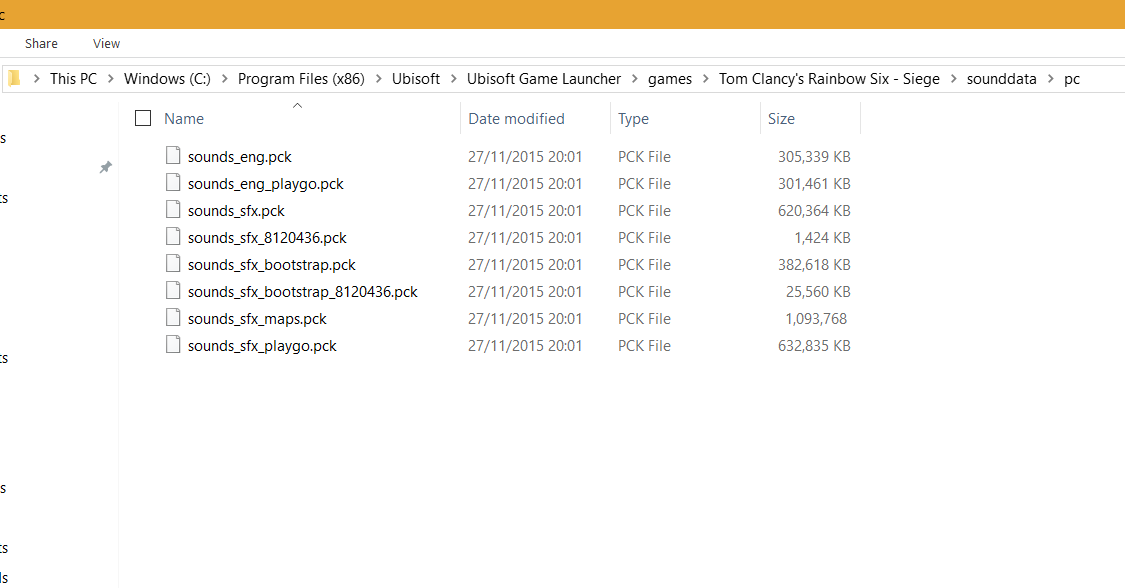 And this is what the game has in pc folder of sounddata folder.
Top

Voron111999 wrote:The thing is, r6_extractor.bat wouldnt work on my game because extractor looked for siege in directory where uplay games are installed and it wouldnt find siege because thats not where my game is installed. So what i did is, i entered system registry and added new keys for siege and placed my game files where uplay games are originally installed. Then .bat worked and now im stuck with this current problem.

You could have just simply pasted the path to your Rainbow Six Siege directory there instead (just don't forget the double quotation marks), e.g.:

Will make sure to put this in the comment above to prevent confusion with the next update.

Back to your problem: I assume you either moved the folder 'bin' or some of the files. If that should be the case, recreate the default structure (see below) or adjust the paths to the programs in 'r6s_extractor_0.7.0.bat' (don't forget the quotation marks).
If you do the latter, make sure that the '.bms' scripts are in the same folder as the 'r6s_extractor_0.7.0.ps1' script (this is due to hardcoded script locations - again, will look into this and fix it with the next update).

The default structure should look like this (files and folders marked with '[optional]' are not important for the script to run properly):

Hey thanks man youve been really helpful! i just deleted the torrent r6 siege i had after extracting required audio files such as musics and stuff manually and bought the game on uplay so its much better that way. I will get to play it and test ur script on it too ill let u know how it goes.
Top

Hmm... waiting for the updates I guess

Meanwhile I'll try to figure out myself how to delete some sounds that are not 'needed' in the game.
Top

For clarification and as mentioned earlier: I can't do that, I was just the pleb who put a couple of scripts together in a more userfriendly way.
Try to get in contact with spider91 for example, from what I believe to know he should be able to do such a task and he also seems to be still somewhat active.
Top

Unfortunately even after all these months I still have the same problem as Voron111999. Extracting and moving and deleting works fine. But it just won't convert them. So it ends up deleting all the unconverted files when it finishes (.wwise, .bnk, etc.)

I set the paths just like you instructed me to. Both in the .bat and in the powershell file. Still deletes everything when it finishes

Windows 10 Pro, PowerShell Version 5.1.17763.316, I added -debug to that line you mentioned, and I tried running it from the desktop, as well as different folders. Oh and the HKEY_LOCAL_MACHINE\SOFTWARE\WOW6432Node\Ubisoft\Launcher\Installs\635 is not found because I bought the game through Steam and not uPlay

Actually just tried re-doing the whole thing from the scratch and I'm getting this error when I run the bat and then it just closes itself:

Tried running the bat and the PS by itself and I'm getting the same result, they both instantly close

OK so .bat problems aside, even if it somehow extracts and doesn't delete the files - it still won't convert them :< I have these folders full of the following file formats: .bnk, .wwise, .lwav, and .at3.

What could be causing the .bat to skip the converting. I have all the tools required in my bin folder I think

Hate to keep you waiting, but I'm really busy right now.
I'll try to update the script rather sooner than later, but can't make any promises right now, nor can I give you a time frame.

Go to your bin folder, press shift+right click and click on 'Open PowerShell here'.
Then paste this and it should convert the files.
For the renaming you'll have to wait a bit more, sorry... :/
Top

Thanks for the reply. I did what you said and it kinda worked, but it's all messed up

No file names, most of them aren't revorbed correctly or at all, empty folders, everything is stacked in one place, etc.

I'm grateful for your help, but if it's ok with you I'll just wait for the script update. Whenever you have time, no rush, and thanks again!
Top

Small status update.
Between 3.4.1 and 4.2 the audio files have been reworked and the somewhat proper names are no longer at the end of the '.bnk' files and I cannot find them anywhere else. However, luckily I started doing backups of the old files a year earlier or so and I'll be able to still sort the majority of the files.
I'll also have a look into the files I don't have references for, but no promises on that end.

Last but not least, I'm aware that the script isn't working properly right now and an update will come rather sooner than later (hopefully near the end of this month, no promises once again, tho (sorry)).
Last edited by FatalBulletHit on Thu May 14, 2020 2:50 pm, edited 2 times in total.
Top

please help
You do not have the required permissions to view the files attached to this post.
Top

First of all, sorry for taking ages to come back to this.

Secondly, if you have any problems updating, remove the main script ('r6s_extractor_0.7.0.ps1') or the folder 'bin' and start the batch wrapper. If it still doesn't work, then you'll have to manually download the 'Launcher.zip' from the main post. I improved the update function once again to ensure reliability, but the issue is down to version 0.7.0 of the main script.


Version 0.7.0 was a mess, so I completely rewrote the script and focused primarily on restoring compatibility with the new audio source files as they were changed in the first half of 2019 (see Small status update), saying that, converting the files previously known as '.lwav' is currently impossible as they are now extracted as '.wav_unknown'.
Additionally, I got rid of the enhanced folder structure, profiles, launch parameters and file overview and the new UI also lead to some preferences being dropped and the remaining ones now needing to be adjusted in the main script before starting (see Documentation - 3. Preferences - if you think some of the dropped preferences were important, let me know and I'll have a look into it).

On the bright side, I fixed (hopefully) all bugs and implemented a lot of error caching (please let me know if you encounter any issues) and performance has been increased drastically (also partially down to the missing '.lwav' files). For reference, I'm running an i7-4960X @3.50Ghz and the overall duration dropped from previously more than 3 hours to now just over 1 and a half hours and, when disabling real-time protection (see Documentation - 1. Performance), to as low as 1 hour.

I also added a complete documentation with all the details I could think of regarding not just the extractor but also the source files.

But the important thing is that, although the meaningful names have been removed from the end of the '.bnk' files, I was able to create alias tables based on my backups which allow for 87% of the currently 72'814 convertible audio files to still be sorted properly (see Documentation - 5. Meaningful Names (Aliases) And Sorting). Note, however, that all files added from 2019 on are probably not sortable anymore (feel free to figure out which folder in 'english(us)\sounds_eng' is for which operator and please let me know).

Last but not least, the batch wrapper has been rewritten and its version (currently 1.1) is now independent from the version of the main script.

All of the above paired with my very limited motivation to complete version 0.8 at the time, lead to version 0.9.2.
I hope everything is working fine again!
Last edited by FatalBulletHit on Thu May 14, 2020 2:50 pm, edited 2 times in total.
Top

Nice, I'm glad you've decided to update this. There's been some work towards deciphering metadata for searchable identifiers in the .FORGE files, for making a tool for the 3d assets in this game. No breakthrough as such yet, but if the headers of those become understood I wonder if it might also show the way to proper names in these too. Anyway, I'll be sure to give this a try soon.