In the game Project X Zone (Console: 3DS), there are a lot of files with the extension .sapk and .efpk.

These files contain a lot of data that can perform various functions, and, a CTPK (CTPK is a container file for one or multiple textures, is an archive format commonly used in 3DS games, The textures are TGA images).

For the graphics be viewed, it is necessary to decompress the file (Compressed as LZ11) and delete all data before the CTPK. Then, just open it on Kukki (one of the kuriimu's tools).

The .sapk files contain a variety of things related to characters (enemies and bosses are included).

As characters in map mode:
sample: http://www.mediafire.com/file/3wbtaavqb ... e.zip/file
Like here: https://youtu.be/3Q89mLOQXTs?list=PLY85 ... 2M9Q&t=520
If you look closely, you'll see that the characters make a small animation of one pixel up and one pixel down.

Also, after moving, the character gets a little darker. 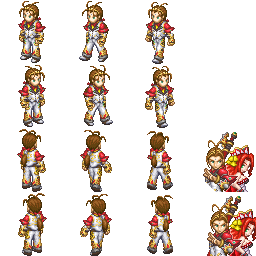 As you can see in these two graphics extracted directly from the .sapk files, there is no animation or color change in the graphics, which shows that the data before the graphics makes these changes.

Another thing, if you notice in the video, above the character there is a certain type of cursor, which also has a .sapk file.

You may not see it in the video, but some of the cursors have an animation that changes pixels and even a mirrored effect, another function of the .sapk file, if I'm not mistaken.

In this video, there are all the attacks of the characters.
https://youtu.be/geuPC4gslUA?t=27

Support attacks, when a team calls another team to make an attack.
Normal Attacks, there are 5 attack choices.
Special Attacks, basically, a stronger attack, with cutscne and everything.
Multiple Attacks, a concept similar to Specials, but you can choose more than one enemy, and they last less time.
Solo Unit Attacks, are similar to Support, but there is a small cutscene and the character is not on a team.

* The images are to large for here, so I put these links *

As you can see, in the _100 file, there are two images, for each character on the team, all the attacks present, except for Support. The characters are divided into a lot of pieces (the developers probably did this to save memory). Then, the data in the .sapk file, also organizes each frame of the attacks, the movement, the collision and other things. Another thing, the bosses of the game, have similar attacks to Special and Multiple, so they also end up with _100.

Files ending in _200, are basically the same thing, except that there is only one attack, and the image of the two characters is mixed into one. The attack files for Solo Units use the _200 too.

Files ending in _300 are small pictures of characters that pass across the screen when called in Support Attack (Solo Unit too) and reused in some Specials. 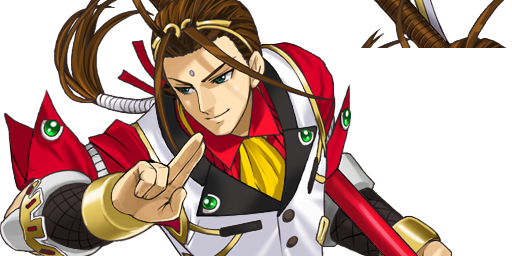 The .sapk data probably fixes the separate parts, and makes a small animation that passes in front of the screen and remains transparent until it disappears.

_310 files are the same graphics as _300, but with less quality, they are probably not used.

Files ending with _301 are small cutscnes for Solo Units.

The data does a lot of readjustment in the image, to organize everything. Animation becoming transparent is also present.

The last of the .sapk files are the ones that end with _001. 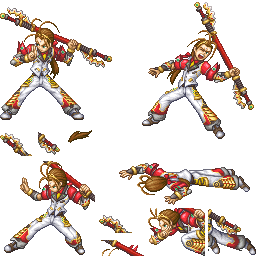 Most are used when attacked by a boss, such as the one who is standing, hit and fallen.
Like here: https://youtu.be/geuPC4gslUA?t=1724

The other two where it is going back and forth, are used when called for a Support Attack, when the character comes and goes.

The characters have 3D shadows, which must be another effect of the .sapk files.

The .efpk files contain all (or practically all) of the game's effects.
sample: http://www.mediafire.com/file/vpopev7k2 ... k.zip/file

As effects of the start menu, map and battle.

These files can also contain a CGFX (CGFX is a container format that is used to store data for 3D models, textures, animations and camera data).

But, it is a much more complicated format. As you can see here: https://youtu.be/geuPC4gslUA?t=967

It looks like a 3D effect, right?
But it is not. One of the functions of .efpk data is to make complicated and big effects with 2D graphics only.

Another example of what .efpk does, is that this:

can turn into this: 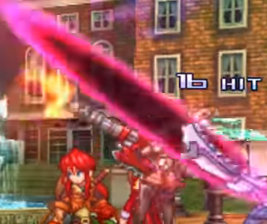 An enemy is split in half, but this effect is from .efpk and not .sapk.

Once, I deleted all data from a .sapk _100 file and the effects either didn't work correctly or didn't show up. Which shows that the files can connect to each other.

.efpk files that are in the "me" folder are effects in map mode and the file me600_001.decomp.efpk are the effects of the menu.

The "be" folder are effects in battle mode, the file be000_001.decomp.efpk are generics that can be used by more than one specific character.

* There are still more files besides these, but it really takes time to decompress one by one. Then I will update the links when I decompress more. *

* There are .ctpk files along with .sapk files, which I placed for easy viewing, but these files are not in the game, I placed them manually. *

* I didn't put .ctpk or .bcmdl (CGFX) files next to .efpk because I thought it would be too confusing, so just delete all the data before CTPK or CGFX to access it. *

Sorry for the long post, but these files really do a lot.
Thanks for the attention, any questions I will be here to answer.

* I apologize for any errors in the text, as I depend on Google Translate to be able to translate my language into English. *
Last edited by Num Sei on Tue Sep 15, 2020 4:42 am, edited 1 time in total.
Top

Re: 2D and 3D data in graphic files