Hello experts. I hope this is allowed here, if not, let me know and I will delete/move it.

Dead Rising 4... lost opportunities, poor execution, sloppy build and hasty release. Could have been a great game under another team,
but I digress.

Is there anyone who can help build a tool that can inject/replace the Frank West model in-game for a better playing experience?

So much clipping, model tearing, orbiting polys... I could go on. Would be nice to maybe replace the in-game model with something a little more functional. I read the game uses the same engine as the RE5 build (Forge? it is Capcom after all) and know that RE has been modded, so no reason why this one can't either.

I have a script for 3ds2016 that will pull models, elements, and skeleton already. What I'm looking for is something to put the modded model back in- I'm aware Frank may have his own skeleton, poly limit, etc. Maybe this script to pull the model can be reverse engineered?

Thanks for considering, I can offer $ for a serious modder who is willing to take this on (within reason).
Top

u should post what u have; tools, source codes, scripts, any notes and samples! everyone always forgets samples..
Maxscript and other finished work I've done can be found on my DeviantArt account
Top

Hope you are well.

@Zaramot produced an effective script for pulling models and their skeletons from the .mdl files in DR4 to 3DSMax (it works in 2016). It is attached.

Dead_Rising_4_UPD_B.7z
If you're having trouble seeing the .tex files, let me know, there's script to fix those too.

I can help with testing as well. Thanks for any input.
You do not have the required permissions to view the files attached to this post.
Top

I spent a decent amount of time coding up a tool, but when I tried to test a mod ingame I had discovered that the game would crash..

Initially I had assumed it was an error on my part, so I had spent a few more days debugging and double checking outputs byte for byte.

So on a desperate last effort I did a simple edit by just changing a random byte in one of the original game files. To my surprise the game crashed AGAIN!!! with something as simple as a single byte change that means something is NOT right.

I don't believe the game was crashing, I think its actively detecting for file changes and will self terminate when a change is discovered.
I based this assumption on the byte test I did and also that the DR4 executable is oddly large. Over 100mbs compared to DR2 which was only 9mbs, this may indicate that they are storing checksum's for each file in the game executable and are actually verifying every file..which is... CRAZY

I'm assuming the developers saw how rampant the modding was in DR2 and sought to eliminate that happening in DR4. Likely they knew their sales were down from DR2 and they were probably pushing the game towards DLC's and micro-transactions in DR4 to save face with CAPCOM.

not to mention the director quit months before DR4's release...

It's for the best anyway, any dev / employer that thinks their consumers or their employees opinions are the problem DON'T deserve support of their staff or consumers! its a team effort after all! 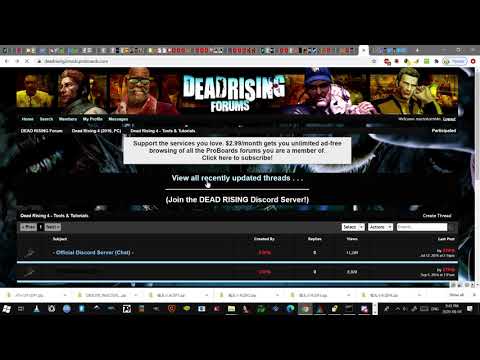 Thanks for this very informative, detailed and well-presented summary. I knew there were lots of issues going on during the development of this game but this releasing a half-assed, messy, broken game yet finding time to incorporate a security/checksum block to prevent anyone else from modding/fixing their shite is A-List level douchebaggery. I hope none of them ever get a job anywhere else.

It's no wonder CV was shut down, this team sounds like a federation of self-absorbed jerkoffs (especially since they put effigies of themselves in the game as bonus mission characters).