lionheartuk wrote:It's not the case.
These characters are DLC, the content doesn't exist in the original game, its downloaded and installed onto the console after purchase.

I'm sorry?
I don't understand whats nonsense about this.
There are around 10 or more people using this tool to find all the meshes in this game, not to mention the countless others online.
Nobody has come across the files that are from DLC's, either stages, textures, characters,rigs or animations, in all of that time.
Thats because the files aren't in the original game disk, I don't understand how anyone can take issue with this, its not negotiable, its exactly how DLC works.

Its true that there have been some games that use DLC to simply 'unlock' files that're already in the base game, but this game isn't one of those cases.
"Lemons are people nice hardworking & honest people too..."
Top

The characters that are missing are not DLC though, that's the thing. I've searched for characters and bosses that are only in the main game and found two, nothing else.
Top

First of all, thank you very much for these tools Daemon1!!!
But I was wondering about something:

Is there anyone else who managed to get this tool to work for Samurai Warriors 4-II (PC)? I saw the post quoted and tried to extract the models this way but I haven't been successful so far

Edit: So I've tried this tool with a model from another Koei game (Toukiden 2 for PC) and it worked as intended (all the meshes right in place, rigged, it converts the .g1t textures correctly too) and yet I still can't get it to work for Samurai Warriors 4-II...
Not sure what I'm doing wrong

if anyone has a clue I'd appreciate it but well I will keep trying in the meantime!
Top

(Sorry for double-posting...but) I've been doing more tests and I haven't had any trouble with Toukiden 2 files yet but still no luck for SW4II 3D files...The tool gives me ascii files but it doesn't seem like the Noesis script supports them? Here's the error I have: 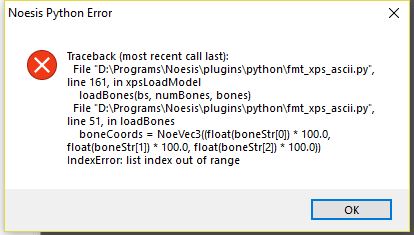 I've uploaded some sample files from both games if anyone wants to take a look (gdrive link since it was too big for an attachment, I hope this is ok...if not tell me and I will take down my link!)

So the PC file names are just random character strings...
You do not have the required permissions to view the files attached to this post.
Top

They may look random but I think is the file name encrypted; I think DOA5 used a similar form of file name "encryption"
Top

Figured so, sorry for bad wording lol
I think DOA6 rdb files looked like that after being extracted


Several files ~3 MB size here have some kind of headers, the others i couldn't understand anything in
Top

hello, i wonder if it is possible to expand the support for Dead or Alive 6? This tool works for some models which got a simple armature (simple outfits, faces, hairs with simple bone structure), but for those with too much bones it just give the error "list index out of range" on the converted ascii.

Why it doesn't surprise me they're trying to extract the PC version already?

Its cool btw. Specialty for the ones that want the DLC files AKA Rinoa or Yuna
Top

This is one of the files which seems somewhat close to what the ones containing 3d/tex/anim data were like on the ps4 game
You do not have the required permissions to view the files attached to this post.
Top

Someone already begging to post models on Deviant Art:

Hope this doesn't turn in another "Private Circle Share", but now for how unpack the data
Top

Hope this doesn't turn in another "Private Circle Share", but now for how unpack the data

Who's begging in there tho?
Top

There is no "private circle share" and there are also no tools. I am the one that posted Yuna and they are dumps from the ram, the files themselves are encrypted.
Top
Post Reply
189 posts