I bet you're all going "oh god, not this again", but hold on, just give me a minute.

As you may know Sleeping Dogs Definitive Edition was released yesterday. It's basically the same game, only with MASSIVELY upgraded visuals, sounds, animations, and with several gameplay changes.

There have already been quite a few tools made for the original Sleeping Dogs, but they only worked half the time, and now they don't work at all. Let me break down all the parts using all the info I got:

Sleeping Dogs uses an engine that was custom-built by UFG specifically for this series. All files are compressed into .PERM.BIN/.TEMP.BIN files, which are packed into .BIG archives with a .BIX header.

Ekey created an unpacker, and was nice enough to quickly update it for Definitive Edition compatibility.

When you unpack a .BIG file, you'll end up with "../SleepingDogsDefinitiveEdition/*NameOfBig*/Data/". If you move the Data folder into the main game folder and remove the BIG file, the game will load the unpacked files directly.

There are some issues with this though. The unpacker doesn't assign filenames to everything, so when the games tries to load the unnamed files it crashes.

All sounds are stored in Audiokinetc Wwise .PCK and .BNK files. These can be extracted with Ravioli Game Tools.

Model vertices, UVs, and weights are stored inside .PERM.BIN files. Marcius Szkaradek created a Blender script that supports all of those, but it has some issues. Full compatibility list:

Vehicles
Slightly scaled mesh, Full UVs, Weights (decal UVs must be obtained with this modification. Tires have no UVs at all.)

Props/Weapons
Intact mesh, UVs mixed. Some have UVs, some do not.

I managed to create an extractor, but some but be extracted by hand. See below.

This game uses the Havok Engine, and all the skeletons are stored in one file. Only Shakotay knows how to extract them.

The animations are in Havok format as well. I've had five people offer to help with these, then promptly get bored and quit or simply ignore me.

Also, interesting to note they they now use version 2013 instead of the previous 2011.


Most of the work is already done. All that's left is to just make the tools work with these new files.

The good news is, I've looked through files from all of the categories, and they seemed practically identical to the old ones. Only difference is a different header.


Forum rules prohibit posting links in public, so PM me for file samples.
Last edited by SergeantJoe on Sat Jan 24, 2015 12:02 am, edited 4 times in total.
Top

Well apparently you don't have to pay cash to get in anymore, so I'll post regarding the TEMP.BINs and PERM.BINs
The textures above are not done by a hacky method, I used Intel GPA to rip those.

These I got out of a hacky method. 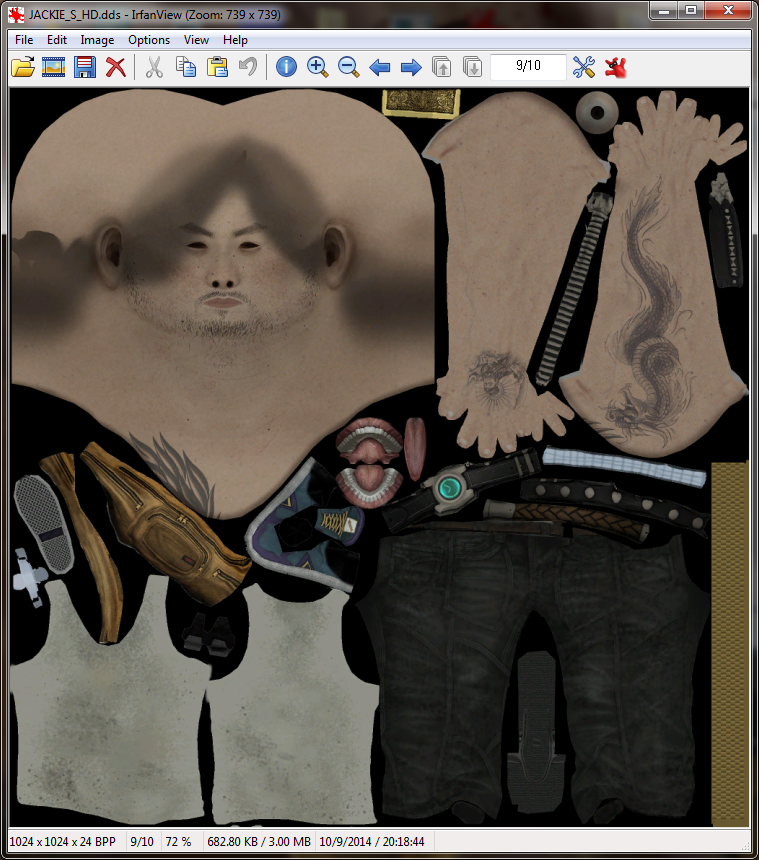 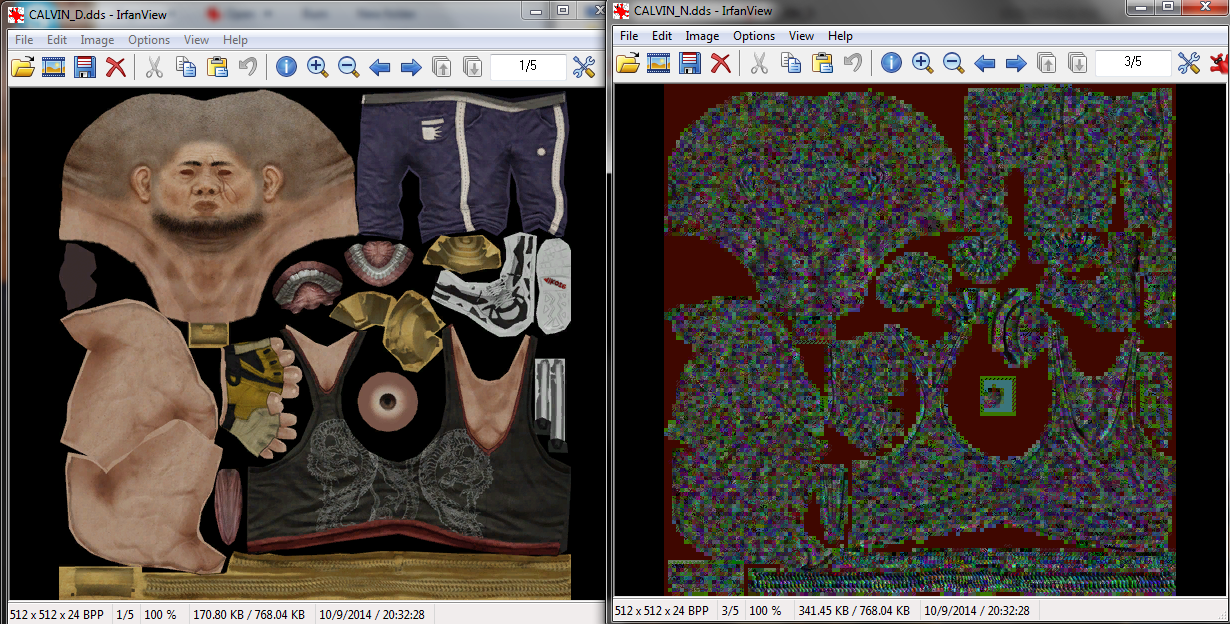 It appears that the TEMP.BINs are compressed the same way as the original Sleeping Dogs, it just seems the code to the PERM.BINs are slightly different so TEXRIPPER can't read them to extract the data.
Top

Theuaredead` wrote:Well apparently you don't have to pay cash to get in anymore, so I'll post regarding the TEMP.BINs and PERM.BINs
The textures above are not done by a hacky method, I used Intel GPA to rip those.

These I got out of a hacky method.

why would you even..

just open up the character bins they got textures

TextureFinder works, but only for the diffuse and specular maps. The normal maps are broken no matter what settings are used.

Also it's worth mentioning they changed the format of the normal maps. They are now just like regular normal maps, only with an inverted blue channel.
Last edited by SergeantJoe on Fri Oct 10, 2014 3:55 pm, edited 2 times in total.
Top

SergeantJoe wrote:TextureFinder works, but only for the diffuse and specular maps, the normal maps are broken no matter what settings are used.

they aren't broken msg me a sample ill get it working

Do you want a normal exported VIA texture finder?


cra0 wrote:why would you even..

just open up the character bins they got textures

now its forever a mystery!
assuming sergeant joe didnt send cra0 a normal map from Intel GPA just to invert the blue channel
still gonna assume that there's something incorrect with the DXT Header for the normal maps.

edit:
woah, getting some deja vu, alpha channel has apart of normal map. Sadly, I already know that the format probably doesn't do that by default, Intel GPA exports a Source Engine like normal with a inverted blue channel.
Top

I just sent him a .temp.bin file.

Also, apparently ATI2N is a type of compression format. I don't know of any programs that support it, so we'll just have to wait until he gets back.
Top

As noted, the executable's PDB file was included in the game files, and after a conversion to human-readable format courtesy of cra0, I managed to dig up some interesting stuff.

No idea how useful any of this is, but I thought it may be helpful.
Top

In order to extract textures from Sleeping Dogs Definitive Edition we basically have to cut the texture bytes out of the .TEMP.BIN file and glue on a proper .DDS header.
It's a bit of a long and obnoxious process though, so bear with me.


1. Open the .temp.bin in TextureFinder and align the texture you want to the top-left corner.

2. Now that we know where it starts, we need to remove all the extra junk around it.

Open the .temp.bin in a hex editor and go to that offset.

That "ÿ" is where the texture starts. Now, delete everything before that point.

3. Once we've isolated the texture bytes, we now need to attach them to a valid DDS header. This is literally as simple as doing Select All, Ctrl-C, Ctrl-V.

Now the tricky part. The information in the header needs to match the format of the texture. There are three importants bits:

There is a lot of incredibly complicated math involved here, so here's a quick cheat sheet for the most common types/sizes.

Make sure the header Width, Height, Pitch, and DXT format match those of the texture.

4. Once everything matches, save the file as .DDS, and you're done!

5. However, this is just the method for diffuse and specular maps.

Set TextureFinder to DXT5, then look for something like this:

This is the normal map. Note the height and offset, then follow the same process, only using the ATI2N header template in the link above.

Only WTV is capable of previewing ATI2N files as far as I know.

Also, as it turns out, .TEMP.BIN files are just a bunch of plain .DDS files glued together!

Using a slight modification of the above method, it's finally possible to make texture mods for the game!

But only for cutscenes, not the actual gameplay itself.
Top

I feel stupid for not realizing those were DDS data

had some fun splicing in my beta Wei Shen remake

And here's the forumla itself:

This will give you the pitch value, but then you need to convert it to hex. I use a DDS script for 010 Editor.
Top

Appears I found out the resolution header.

The header is about 3 lines after the mention of the name of the texture in the PERM.BIN

That's a 2048x2048 texture with the correct header from the DDS headers,